First, let me start off by saying this:  I realize not all our readers are in Boston so if after watching this video you still need a definition for what a Masshole is then please go here.

Secondly, not all Massholes are cut from the same cloth.  Yes there are people like this…but it’s not the majority I assure you – at least not where we hang out.  But hey, for once they got the accent right.  Examples of Boston residents who don’t suck: they don’t, these guys don’t, and these guys certainly don’t.

Lastly, what is this video doing on our blog anyway?  Wait, oh yes.  We’re from Boston and we’re nothing like this – and Yankees fucking suck!

We Are At Risk Of Being Shut Down

So hopefully you’ve been enjoying what we offer on our little blog.  We love providing a platform for and showcasing those bands/artists/musicians who are fucking awesome but don’t necessarily get the attention they deserve.  We love informing you about them and sharing their work with you.  Unfortunately “The Man” is considering a bill that would prevent us from sharing all this wonderful art with you.  This music blog and many others that you and I enjoy are at risk of being shut down.  The good thing is that we can help prevent this from happening with a single phone call to our Senators, please help.

Coldplay put out a new album last week.  We’re using the word “new” very loosely here because it sounds like the same shit they did on the last two albums plus some borrowed stuff (but I don’t think they intended for anyone to know that).  They did make the effort to write some new corny lyrics though (Every Teardrop Is A Waterfall? Give me a fucking break) so we made the effort to write this corny review.  Good for them for recycling?

Don’t waste your money on  Mo’ XY eh whatever it is, check out THIS BAND instead.

EvillDewer is one of Boston’s busiest indie producers.  In the span of a month he has put out an album, two EPs, and a teaser for a project titled CrownChakraRocka.  All this while playing local shows, producing beats for up-and-coming Boston rappers and putting the final touches on The Blue Rose Therapy – his album for Magnificent Kingdom; a duo project of which he makes up one half alongside Magno Garcia.  Though it may seem that all these projects are brought to life almost overnight, and in some cases this may be true, the quality of his work never suffers.  Listening to the various works of EvillDewer is like traveling into uncharted dimensions because they vary so much in style.  Hip hop may be a big influence in his work but there are touches of the Avant-Garde, classic soul, nature, mysticism, and even Nintendo among others.  Those with an adventurous ear will be more than satisfied with what EvillDewer delivers.

More about EvillDewer:
Introducing: Magnificent Kingdom – “I Used To Love Her” (Stream)

An Interview With Hot Vestry 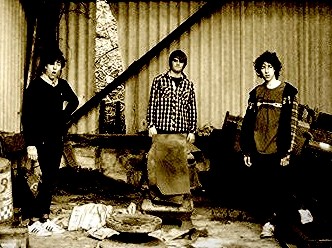 If you’ve been following us on Facebook or Google+ you know that August was Hot Vestry month at Oimos.  That’s because we proudly named this British trio the very first band to hold the Artist of the Month title back in August…and we enjoyed promoting the shit out of them. (September’s Artist of the Month Welcome Back Sailors).

We had the opportunity to ask Hot Vestry a few questions and this is what they had to say:

O:  Hot Vestry, what does it mean? How did you decide on the name?

HV:  The name ‘Hot Vestry’ came about when we practiced in the local church. We kept the microphone stands in the room in the church called ‘The Vestry’.  One day as Harry and Will were walking into the room, Harry pulled the cord above his head, while Will switched the switch on the wall.  They thought nothing more of it as they both thought they’d turned the light on.  We practiced and put everything away and that was that.  A couple of days later Steve Rathbone (The Vicar) phoned our mum.  He said how hot the Vestry was, and how it felt like an oven!  He said it was a ‘Hot Vestry’, someone left the heater on!  Luckily he likes us so he wasn’t annoyed.  So we were like, let’s call ourselves Hot Vestry after nearly burning a church down!

O:  That’s funny!  When did you begin playing and composing your own music as a band?

HV:  We began composing and playing our own music just over 1 year ago, and ever since then we’ve been writing.

O:  It’s clear that you like experimenting with different sounds while maintaining that rock feel, are there any other genres that have influenced your sound?

HV:  There’s a lot of music really that influences our sound.  We don’t forces ourselves to listen to the same music or to listen to the latest modern music.  There’s no point in three people liking the exact same music in a band, everyone’s playing would be the same.  That would be boring and not very enjoyable for any of us.  Sometimes we listen to The Beatles and other times we’re listening to DJ Hazzard.  It all depends on what we want to listen to at that time!

O:  What are you listening to at this time?

O:  Where do you find inspiration for songs and do you ever get writer’s block?

O:  What comes to you first lyrics or music? Is there a formula you follow for songwriting?

HV:  The music normally comes first, then Harry will get his lyric book out and fit everything together!

O:  You’re definitely creating a buzz in Manchester and it won’t be long until it’s world-wide, is this clear to you and do you feel prepared for that kind of attention?

HV:  Thank you!  We don’t see it really, we just gig and play our music to as many people as we can.  If they like us then that’s great!  If they don’t we’ll try harder and try and get their appreciation.  I don’t think we want to see it.  We don’t want to get complacent and think we’ve made it.  I don’t think we’ll ever imagine ourselves as being ready for that kind of attention.  We’re three boys from Rainow!  But if it happens we’ll see what it’s like and go with the flow.  I’m sure we’ll love it!

HV:  John Lennon, because he wrote and sung from the heart.  You can’t do anything but respect him for that, and his solo music is amazing.

With Portamento due out next month, Sept. 13th , The Drums have announced a UK tour.  Presale tickets will be available THIS WEDNESDAY! (see below for details)

The Drums will return to the UK later this year for a full headline tour.

The exclusive fan presale begins at 9am on Wednesday 17th August at:
http://www.thedrums.com/presale

Tickets will then be available on general sale from 9am on Friday 19th August here.

A full list of tour dates is at http://thedrums.com/shows/